In the previous hearings, the committee has sought to tie Trump to the violence at the Capitol, showing how he was warned by his aides that his claims the election was stolen were baseless and that there was a risk of violence on January 6, 2021. The committee’s final hearing in this series will attempt to illustrate how the former President “refused to act to defend the Capitol as a violent mob stormed the Capitol,” according to committee aides.

Like past hearings, the committee is likely to rely on witness testimony of those who were around Trump on January 6 or nearby in the West Wing, in order to tell the narrative of what happened through the words of Trump’s inner circle.

Two witnesses are slated to testify in person on Thursday, and both resigned in the immediate aftermath of the January 6 attack: Former Trump deputy national security adviser Matthew Pottinger and former Trump deputy press secretary Sarah Matthews.
Trump’s former chief of staff, Mark Meadows, has not testified before the committee — the House voted to hold him in contempt of Congress for defying a subpoena. But Meadows selectively turned over more than 2,300 text messages to the panel, which CNN obtained, and the texts provide key insights into the frantic messages the chief of staff was receiving from Republican allies in Congress and even Trump’s son urging the President to act.

Here are some key questions and answers about the 187 minutes of January 6 ahead of the final hearing:

When do the 187 minutes begin and end?

The 187 minutes began at 1:10 p.m. ET on January 6, 2021, as Trump was wrapping up his speech at the Ellipse. This is when he told his supporters to march to the Capitol, so they could pressure lawmakers to overturn the election while they met for a joint session of Congress to formally certify President Joe Biden’s victory.

Exactly 187 minutes later, at 4:17 p.m. ET, Trump posted a video on Twitter. In the clip, he said for the first time that his supporters should leave the Capitol. He also heaped praise on the rioters and repeated his debunked lies about the election, which had spurred the riot in the first place.

Why do the 187 minutes matter to the committee?

This timeframe is central to the committee’s mission. Republican Rep. Liz Cheney of Wyoming, the committee’s GOP vice chair, has repeatedly said that the evidence obtained by the panel about these 187 minutes provides a clear example of Trump’s “supreme dereliction of duty” throughout the insurrection.
The panel’s Democratic chairman, Rep. Bennie Thompson of Mississippi, said earlier this year, “The President was told, ‘You need to say directly to your people to go home, leave the Capitol.’ And so, it took over 187 minutes to make that simple statement. Something’s wrong with that.”

Thursday’s hearing will be led by Rep. Elaine Luria, a Virginia Democrat, and Rep. Adam Kinzinger, an Illinois Republican. Luria said on CNN’s “State of the Union” Sunday that the hearing would “go through pretty much minute-by-minute” of what went on during the 187 minutes of the Capitol insurrection.

“The President didn’t do much but gleefully watch television during this time frame,” Kinzinger said on CBS’ “Face the Nation” on Sunday.

What do we already know about the 187 minutes?

After leaving the stage at the Ellipse, Trump got into his motorcade and angrily tried to convince his drivers to take him to the Capitol, according to testimony from Trump White House aide Cassidy Hutchinson. The agents refused, telling him that the scene was too dangerous and unstable.
Trump then watched TV news coverage of the chaos unfolding at the Capitol, according to a book by Washington Post reporters Bob Woodward and Robert Costa, and according to then-White House press secretary Stephanie Grisham, who said Trump was “gleefully” watching the news.
White House Counsel Pat Cipollone told Trump’s chief of staff that Trump needed to intervene, or else “people are going to die,” according to Hutchinson’s testimony. Meadows responded by telling Cipollone that Trump “doesn’t want to do anything” and that he even agreed with the rioters who were seen chanting about hanging Vice President Mike Pence.

Trump posted three tweets during this critical timeframe. The first tweet criticized Pence for refusing to overturn the election. The second and third tweets told the rioters to “stay peaceful” and to “respect the law” — but notably Trump did not instruct his supporters to leave the Capitol.

He also spoke by phone with House Minority Leader Kevin McCarthy, a California Republican who pleaded with Trump to call off the mob. But during the call, Trump took the rioters’ side and said they cared about the election more than McCarthy did, according to previous reporting.

Who was with Trump and what have they said about it?

The committee has taken video depositions from multiple people who were with Trump on January 6 and is likely to use those interviews to try to explain what the President was doing when rioters breached the Capitol.

The testimony from many of those inside the White House are likely to be played in order to help tell the story of what Trump was doing during the afternoon of January 6.

The committee has previously played clips from both Pottinger and Matthews, the two in-person witnesses Thursday, reacting to Trump’s tweet attacking Pence.

“I remember us saying that that was the last thing that needed to be tweeted at that moment,” Matthews said in a clip from her video deposition. “The situation was already bad. And so it felt like he was pouring gasoline on the fire by tweeting that.”

Pottinger told the panel that Trump’s tweet was what prompted him to resign. “I read that tweet and made a decision at that moment to resign,” he said in his video deposition. “That’s where I knew that I was leaving that day once I read that tweet.”

“Was it necessary for you to continue to push for a statement directing people to leave all the way through that period of time until it was ultimately achieved?” Cipollone was asked in the video deposition.

“I felt it was my obligation to continue to push for that and others felt it was their obligation as well,” the former White House counsel responded.

The committee’s testimony — along with reporting from CNN, other news organizations and several books about the Trump presidency — have filled in key details about what was going on inside the West Wing. Kellogg told the committee, for instance, about how he encouraged Ivanka Trump to speak with her father on January 6 to act, and that she did so multiple times that day, according to committee documents.

The committee has also spoken to numerous West Wing officials who didn’t see Trump directly as the violence was unfolding but were reacting to what was happening on both ends of Pennsylvania Avenue.

Williamson, Meadows’ top aide, told the committee how he texted Meadows encouraging Trump to tweet because things were “getting a little hairy” at the Capitol. Williamson told the panel that he went to speak to Meadows in person, and the White House chief then went toward the Oval Office, according to court filings.

What are the big unanswered questions?

While lots of details about Trump’s response on January 6 are already known, there are still lingering questions about what the former President was doing on January 6.

For instance, Trump spoke with at least two Republican lawmakers during the early stages of the insurrection: McCarthy and Alabama Sen. Tommy Tuberville.
While there has been previous reporting about McCarthy’s heated phone call, including that Trump told him that the rioters were “more upset about the election than you are,” McCarthy has not spoken at length about the conversation. The committee issued a subpoena to McCarthy and four other lawmakers in an unprecedented move earlier this year, though McCarthy has not agreed to testify or hand over documents.
Questions also remain about who else Trump spoke with by phone on January 6 during the period when the Capitol was breached. There are gaps in the White House call logs on January 6, providing incomplete public accounting of the conversations Trump had that day.

Another key question the committee is likely to dive into is how it was Pence — and not Trump — who ordered the National Guard to respond to the riot. At a hearing last month, the committee played testimony from Chairman of the Joint Chiefs Gen. Mark Milley saying it was Pence who gave him “very direct, unambiguous orders” to get the Guard to the Capitol.

But Milley testified that Meadows told him to say that it was Trump, not Pence, who gave the order. “He said: We have to kill the narrative that the Vice President is making all the decisions,” Milley said in his video deposition about what Meadows told him. “We need to establish the narrative, you know, that the President is still in charge and that things are steady or stable, or words to that effect.”

Thu Jul 21 , 2022
NEWYou can now listen to Fox News articles! Prior to her death last week at age 73 after a fall in her New York City townhouse, Ivana Trump’s friends were worried about her navigating her twisting staircase, according to reports. Ivana Trump died last Thursday from blunt force injuries to […] 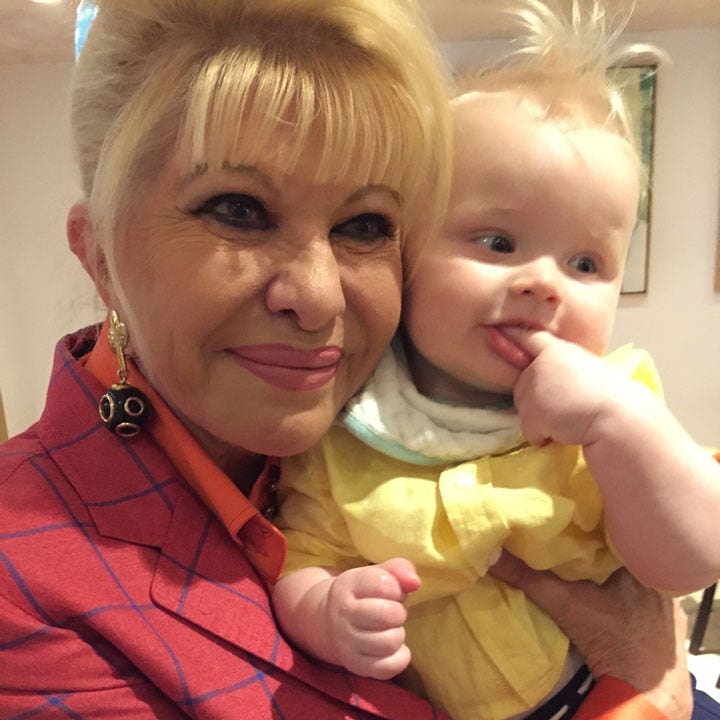