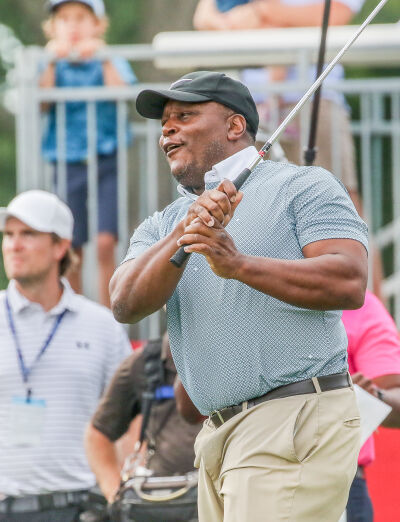 Hall of Famer Barry Sanders takes a swing on the 15th hole at the 313 Celebrity Scramble at Detroit Golf Club.

While giving attendees the opportunity to watch and meet professional golfers up close for free July 26, the Rocket Mortgage Classic aced its chance to bring in superstar athletes with strong connections to the community.

“Our goal of focus here is to impact the outcome of Detroit and shine a bright spotlight on it,” Rocket Mortgage Classic Executive Director Jason Langwell said. “Holding special events like this helps to make that spotlight even brighter, and getting big-name players and big-name celebrities, both locally and nationally, just helps to do what we’re trying to accomplish here.”

Rocket Mortgage Classic and Langwell have made it apparent that this tournament is more than just about hosting a Professional Golfers’ Association tournament, but rather using the excitement and reflecting it back onto the community and the golfers of tomorrow.

Building for the Future

The Rocket Mortgage Classic kicked off its event-filled day with the Youth Golf Clinic presented by Children’s Hospital. The event, which was free to the public, brought hundreds of children from across Detroit to stand within feet of professional golfers and athletes.

As children stormed the driving range eager to earn a chance for a photo or autograph, the crowd was divided into two stations with the promise that they’d have their opportunity to meet each celebrity.

Johnson, as expected, was consistently met with children eager to earn an autograph or photo, and Johnson happily made their dreams a reality.

“Anytime we’re able to do anything that’s helping the kids become more productive, whether it’s sports or in the classroom, and anytime you get the chance to support my foundation with myself personally, I’m all behind it,” Johnson said. “Just to be out here and connect, that’s the big, big thing — just to be able to connect with everybody.

“Make someone smile, have a good time, take pictures, and sign an autograph, it’s just being able to take it full circle and enjoy the people that were cheering for me while I was playing.”

Johnson, Allen, and Stackhouse took turns driving shots into the net with both an iron and a driver with lessons in between.

Allen had high praise for the city of Detroit after the clinic.

“Detroit is one of the great cities in the Great Migration, and especially for minorities it was always a land of opportunity; it’s been the voice of the people forever,” Allen said. “If you look back in the Motown days, it’s always been a city of hope and kind of fell on tough times, but now I’m glad to see it coming back; it always starts with the youth.

“If you give the kids something to look forward to and strive to, they start seeing value in themselves and in the things really around them. You start to resurrect into something so amazing, and that’s what you’re seeing in this tournament here.”

“Obviously it’s nice to come here and play this golf course, but it’s nice to be able to take a second and give back to the community,” Woodland said. “We’re kind of adopted here this week; Detroit has treated us amazing, It’s awesome. These kids want to have fun and are out here having a good time; it’s nice to see a smile on their face.”

Woodland, like Calvin, was swarmed with photo and autograph requests after the conclusion of the clinic.

With athletes such as Hall of Famers Barry Sanders and Johnson, and the Detroit Red Wings’ Dylan Larkin paired up with PGA golfers, it was Michigan State men’s basketball coach Tom Izzo who had the last laugh.

According to Izzo, he had nothing to do with the success.

“I sucked; I wasn’t very good,” Izzo said. “I hate to say it, but I’ve been doing my day job; some of our alums know I’m not very good, but I will get better as this month comes along.”

After describing his lackluster performance, Izzo talked about how important a role the Rocket Mortgage Classic and the 313 Scramble play in the community.

“I think that’s what it’s all about; I think all of us that are in the public eye one way or another, and I met some incredible guys today, but all of us want to give back,” Izzo said. “That’s what it’s all about, and especially the people who don’t have the things we have; I thought this charity part was awesome, and just getting everyone in Detroit (for these events) is awesome.”

Sanders was shaky off the 16th tee, topping his first drive roughly two yards, and then followed up his mulligan with a tee shot into the water. He regained his composure and was productive with the putter and iron.

Having warmed up from the golf clinic, Johnson’s ball-striking was impressive, but he found himself strong-arming irons, chips and putts. Day served as Johnson’s instructor for the round, as Day would give him pointers on chipping and iron shots.

On the final hole at 15, Johnson drilled a 30-foot putt and smiled as the players and fans were ecstatic.

Johnson, who played with Detroit Lions coach Dan Campbell from 2006-2008, talked to reporters about his respect for Campbell.

“He was starting with basically one arm,” Johnson said regarding Campbell’s season-ending elbow injury in 2007. “A lot of guys don’t know that, but the guys that do (know) respect that, and if you really understood his history, the guys that are in that locker room, they’ll respect him that much more. One, just being a player, but being the passionate player that he is; I know he is carrying that passion over to his coaching, and I’m happy for him.”

Larkin was matched with PGA golfer Will Zalatoris and Mariah Stackhouse. The talented group came up just short of Kuchar’s team.

“I’m excited for the pressure going into camp,” Larkin said. “We got the pieces, but now we have to do something with it.”

Thu Jul 28 , 2022
A man who shot at police in Colorado this week from inside his home prompted officers to return fire, leading to the death of his brother, an affidavit says. Police responded to the home of Phillip Blankenship, 29, at about 7:40 p.m. Sunday in the Denver suburb of Englewood, according […]